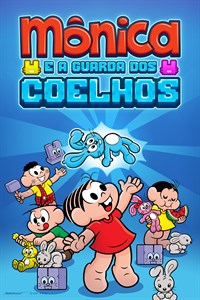 MONICA E A GUARDA DOS COELHOS is a couch co-op game for 1 to 4 players, with a focus on teamwork and cooperation.
Playing as a group with (many) heroes from the Brazilian IP Monica and Friends, everyone must have a different role and defend the castles against the smudge horde! Use magical bunnies with unique powers, load them into cannons, and fire them at incoming enemies! Join Monica and her friends in this great adventure!
Buy Now