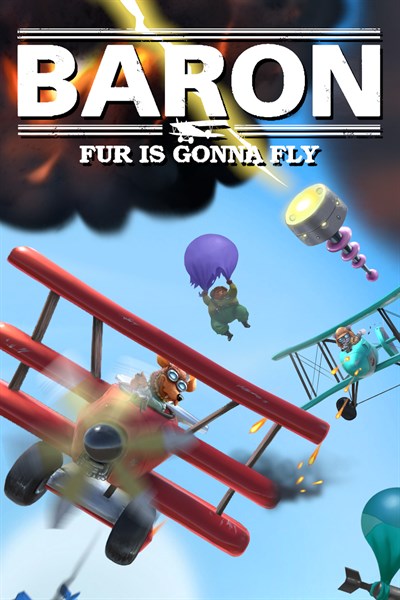 In the world of Baron, the Great War rages on. Aircraft are new, exciting machines that defy gravity!

Those who fly them — those brave animals — are daring, flamboyant, and impossibly glamorous.Take to the sky in your trusty biplane and join intense battles against other pilots.

Up to 8 players can battle either all-on-all or in teams.

Arm your aircraft with wonderful weapons that include Giant Anvils, Freeze Rays, or the ever-popular Banana Peel!

Flying is easy to learn. (Even non-gamers will be flying in no time.) But under the hood, the aerodynamics have a depth that will take months to master.

8 heroic characters- each with their own taunts, insignia and victory song.

13 Special Weapons will keep you busy discovering new ways to destroy your opponents.

So pull on your goggles, strap in, and prepare for takeoff. Fur is gonna fly!

Pre-order
NOTE: You may pre-download this game, but it will not be playable until the release date/time: 03/03/2020 – 4:00 PM (check the product page for release date/time in your region).
Product Info:
Developer: Dogmelon Games
Publisher: DM Games Pty Ltd
Website: Baron: Fur Is Gonna Fly
Twitter: @DogmelonGames