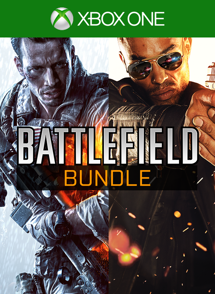 In Battlefield Hardline’s single-player campaign you’ll play the role of Nick Mendoza, a young detective who embarks on a cross-country vendetta, seeking revenge against once trusted partners on the force. Battlefield 4 is the genre-defining action blockbuster made from moments that blur the line between game and glory. Only in Battlefield will you blow the foundations of a dam or reduce an entire skyscraper to rubble, or lead a naval assault from the back of a gun boat.

Purchase Battlefield Bundle for Xbox One from the Xbox Games Store