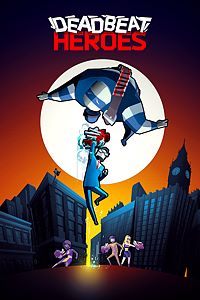 Deadbeat Heroes is a movement-based 3D brawler in which you dodge bullets, steal super powers and crack wise.

You play as the new wave of ‘Deadbeat Heroes’. Not born with their own powers, they are armed with a super gauntlet and the ability to ‘borrow’ the powers of others. Vie to win the hearts of the public with your amazing derring-do, while not getting shot, sliced or lasered.

Purchase Deadbeat Heroes for Xbox One from the Xbox Games Store