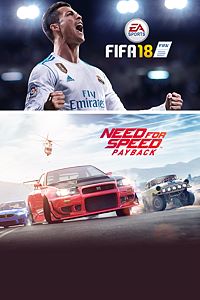 Get into the fast paced action with two great EA games in one bundle featuring EA SPORTS FIFA 18 and Need for Speed Payback.

EA SPORTS FIFA 18 blurs the line between the virtual and real worlds, bringing to life the players, teams, and atmospheres of The World’s Game. Move with Real Player Motion Technology to unlock Dramatic Moments in the world’s most Immersive Atmospheres. And go on a global journey with a star-studded cast of characters in The Journey: Hunter Returns.

Need for Speed, one of the world’s bestselling video game franchises, returns with a vengeance in the new action-driving blockbuster, Need for Speed Payback. Set in the underworld of Fortune Valley, you and your crew were divided by betrayal and reunited by revenge to take down The House, a nefarious cartel that rules the city’s casinos, criminals and cops. In this corrupt gambler’s paradise, the stakes are high and The House always wins.