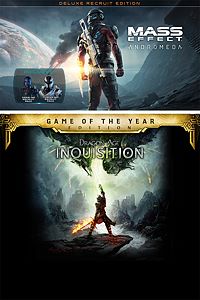 Mass Effect: Andromeda – Deluxe Recruit Edition takes players on a mission to find a new home for humanity, in the Andromeda galaxy. As the Pathfinder, you lead humanity’s fight for survival. This edition includes the Turian Soldier and Asari Adept Multiplayer Recruit Packs which ensures you will join the battle well equipped with the Turian and Asari Multiplayer Characters and a selection of special weapons, items and boosts.

Dragon Age: Inquisition GOTY Edition allows you to become the Inquisitor and lead a team of unique heroes on a perilous journey through a beautiful, open world. This edition includes the critically acclaimed game, all official add-ons – Jaws of Hakkon, The Descent, and Trespasser – and added features including the Deluxe Upgrade, Spoils of the Avvar & Spoils of the Qunari.