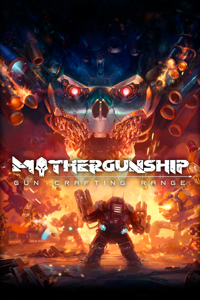 Craft gun monstrosities that no reasonable person could ever lift in the official MOTHERGUNSHIP: Gun Crafting Range demo.
MOTHERGUNSHIP mixes bullet-hell intensity with the FPS genre and promises you one of the largest gun customization options seen in video games.
Want to build a gun with fifteen barrels that will cover all sides of the screen? Or do you prefer a shotgun that can shoot bouncing spike balls? And how about something that has barrels arranged in a heart shape, allowing you to profess your love to your Co-OP partner? Go for it! The design of your destructive arsenal is in your hands.Face off against overwhelming odds in chaotic non-stop combat, fight gigantic bosses, play online alongside your friends in a full co-op experience, and rise up to face the ultimate challenge: the MOTHERGUNSHIP.