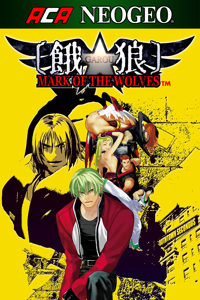 GAROU: MARK OF THE WOLVES is a fighting game released by SNK in 1999.

The son of Geese Howard, Rock Howard, who has been raised by Terry Bogard is the main character in this first episode of a new generation in the “FATAL FURY” Series. ’

Numerous new game mechanics such as the “Breaking” feature have been introduced in this acclaimed fighting masterpiece resulting in a game with a variety of deep strategies available to players.