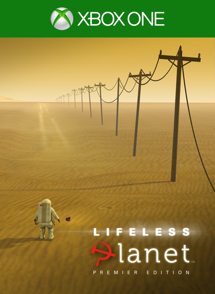 After a hard landing on the planet, the astronaut discovers the planet that was reported to be rich with life is instead a barren wasteland. When he goes searching for his crew, he makes a more startling discovery: evidence that humans have already been to this planet years ago! When he comes upon a deserted Soviet-era Russian town, he struggles to make sense of his mission. Explore 20 unique and atmospheric environments on a vast and treacherous planet.

Xbox Live Gold members save 20% when they purchase Lifeless Planet (for a limited time only).

*Please note: prices and availability are subject to change and may vary by region.

Purchase Lifeless Planet: Premier Edition for Xbox One from the Xbox Games Store