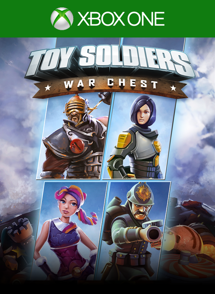 Take turns protecting your toy box and preparing waves of different enemies for the best attack.

If you would rather join up with your bestie and take on other teams of toys in the new 2v2 mode, plan a playdate! Cooperative and Couch Play Team up with a friend to play any of the main campaign, weekly war, survival, or multiplayer maps together! You can play split screen on the same console or invite your friends and play online.

Purchase Toy Soldiers: War Chest for Xbox One from the Xbox Games Store