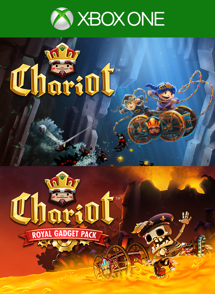 The Chariot Bundle includes Chariot and the Royal Gadget Pack DLC. Embark on a journey to take His Majesty on the ride of His afterlife.

Guide a chariot containing the King’s remains through underground caves using physics-based mechanics such as pushing, pulling, riding and swinging. And that’s not all! The Shopkeeper joins the action, bringing along 5 new gadgets! Play as the Shopkeeper in solo or co-op and try out new technology delivered straight from the royal engineers’ workshop!

Purchase Chariot Bundle for Xbox One from the Xbox Games Store